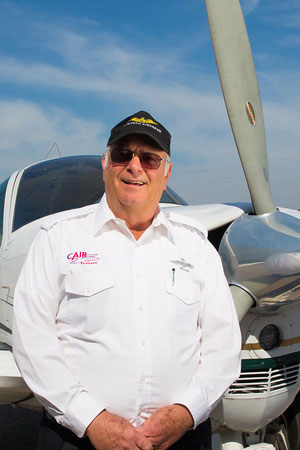 “Rick” was born in New Jersey and managed to “escape” at the age of 18. To this day he says: “New Jersey is a great place to be FROM!”

He graduated from the University of Virginia, majoring in French – a curriculum that prepared him for reading fancy menus in nice restaurants. Coincidentally, he was accepted into the Peace Corps intending to teach English to the Bedouin tribes-people using their native French language. Because of the middle-eastern “six day war” in 1967, however, Rick thought it prudent to forgo living in the Tunisian desert. Being 21 days from the draft, Rick chose to enlist in the Air Force and served as an Operations Officer and Pilot for five years in the Pacific region!

His four decades of work experience includes leadership positions in 5 major industries, which simply means he could never decide what he wanted to be when he grew up – – Rick said he watched his friends growing up and it’s not pretty!

Along the way he gathered over 9,000 flight hours, holding an Airline Transport Pilot Certificate with a Learjet Type Rating. During his last career, he served almost 7 yrs as captain for a “private” airline serving the US, Canada, Mexico and the Caribbean. Flying the “rich and famous” allowed him the joys of becoming “a 400 MPH limousine driver.”

Rick is also a Certified Instrument Flight Instructor, and is particularly proud of those who have survived his lessons and maintained his 100% pass ratio.

In 1993, he learned about volunteer flying from another “airport bum.” Since then he has personally flown over 200 missions, including “red eye” transplants. Rick served at the Board level and Chairman for a regional volunteer group in 1999/2000. He soon learned that local representation was needed in the Tampa Bay area. With the help of fellow Rotarians and his wife Louise, CAIR Flight Inc was chartered and received IRS 501c3 status in Oct 2004. (Because of potential age discrimination, Rick won’t admit he’s a charter member of the Temple Terrace Club).

CAIR flight holds as its Core Value that everyone deserves to receive life saving treatment or compassionate care despite the obstacles of “time, distance, or finance.” Our volunteers and pilots are proud of this unique “Avenue of Community Service;” volunteering their time, skills and equipment to meet the needs of our fellow citizens.

Rick feels privileged to serve his community and wants to share his desire to grow CAIR flight into a permanent legacy of community service – – – the need is there! You can reach him at: Rick@CAIRflight.org