CAIR Flight and GivingFlite partnered together to transport two Tampa area teenage girls to the University of Alabama at Birmingham’s Department of Pediatrics. Within this facility is another specialized center dedicated to the multi-disciplinary evaluation, treatment, and follow-up of children and teens with multiple sclerosis (MS). 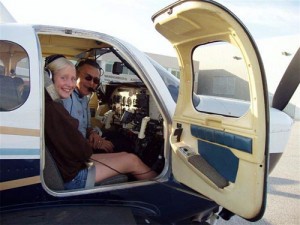 Summer vacation for sixteen year old Amber began with a flight bound for Birmingham’s prestigious facility. Mom was excited to fly in CAIR Flight pilot Chuck Norris’s Piper aircraft; however, Amber was apprehensive about flying. The skies looked beautiful from the ground, but as luck would have it the higher altitudes were not quite as calm. They connected with GivingFlite’s pilot at Tallahassee Regional Airport to continue the journey to Birmingham, Alabama. Doctor’s reports were optimistic with no additional visits required for a full year. That works for Amber! “Amber’s goal is to get her drivers license. She told us she wants to travel by land and leave the flying to the birds and the pilots!” her dad chuckled.

Thirteen year old Harley arrived at Vandenberg Airport with her parents the day after Labor Day. In contrast to Amber, she was all smiles and excited about her journey. CAIR Flight pilot Larry Marlewski gave Harley and mom the tour of his Mooney and reviewed safety information. Harley was thrilled to ride in the co-pilots seat—mom warned that she’s one for lots of questions. Larry didn’t seem to mind and mom reported back that Harley had the time of her life during the first leg of the mission.

Harley’s visit at the Center for Pediatric-Onset Demyelinating Disease (CPODD) also went well although she will be returning in six months for a follow-up examination. Harley aspires to attend the University of Florida’s College of Veterinary Medicine. You would never know that this enthusiastic youth has had three lengthy and debilitating bouts with MS in the past 14 months. Her dad said that she has remained courageous even after rehabilitation twice to learn to walk and write again.

Terry Copeland, CAIR Flight’s pilot for the return mission, was also touched by Harley’s positive attitude. “MS has long been one of my charities as my best friend from high school contracted the disease many years ago. So today’s flight really had special meaning for me.”
Comprehensive care, education, and research done at CPODD will ensure that children like Amber and Harley will continue to have dreams and lead healthy lives. We thank all of the pilots from CAIR Flight and GivingFlite who made these missions a reality!