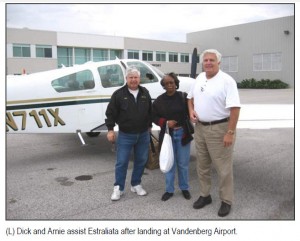 CAIR Flight received a referral call from the American Cancer Society’s Patient Services. A Tallahassee resident needed transportation for her annual oncologist appointment here in Tampa. So how did the mission get filled?

Arnie Glauser has been flying since he was 14 years old. “I started lessons at Albert Whitted Airport in St. Pete and have been flying ever since,” he said. He had recently made arrangements to rent a plane that belonged to none other than CAIR Flight’s founder, Rick Wachstein. Rick was out-of-town that week, so he suggested that Arnie might be available and could use his plane.

Arnie willingly accepted and asked Dick Arens, co-member of Ye Mystic Air Krewe (flight team providing formation flying demonstrations throughout Florida), to be his co-pilot on his first flight representing CAIR Flight. The two buddies love to fly together and here was an opportunity to do that and help someone in need.

Estraliata is an 18 year cancer survivor. She follows the protocol and never misses her annual exam. While living in Orlando and Riverview she was active in American Cancer Society Reach to Recovery program. She received the benefit of their support and became a volunteer and participated in numerous fundraising walks.

Estraliata is now unable to drive due to Retinitis Pigmatosis affecting both eyes. However, she is positive, optimistic, and inspirational. She is currently enrolled in an online study program to prepare for a position doing medical coding for insurance companies—she has a special monitor that allows her to utilize her computer. “My experiences have led me to an interest in the field. So much has changed since I had cancer surgery eighteen years ago.”

(L) Dick and Arnie assist Estraliata after landing at Vandenberg Airport.
Positive enthusiasm for life runs in the family. Estraliata’s 86-year old father, Emanuel Johnson picked her up at Vandenberg airport. He looks 15 years younger than his age and is bursting with energy. Estraliata told me that he is a faithful juicer. “He enjoys a morning and evening drink. Sometimes he uses vegetables and other times fruits. He adds ginger root for flavor.”

“All of the women in my family have died from cancer. I chose not to take on that fear,” she commented. Estraliata is a steward of positive thinking and it has served her well!